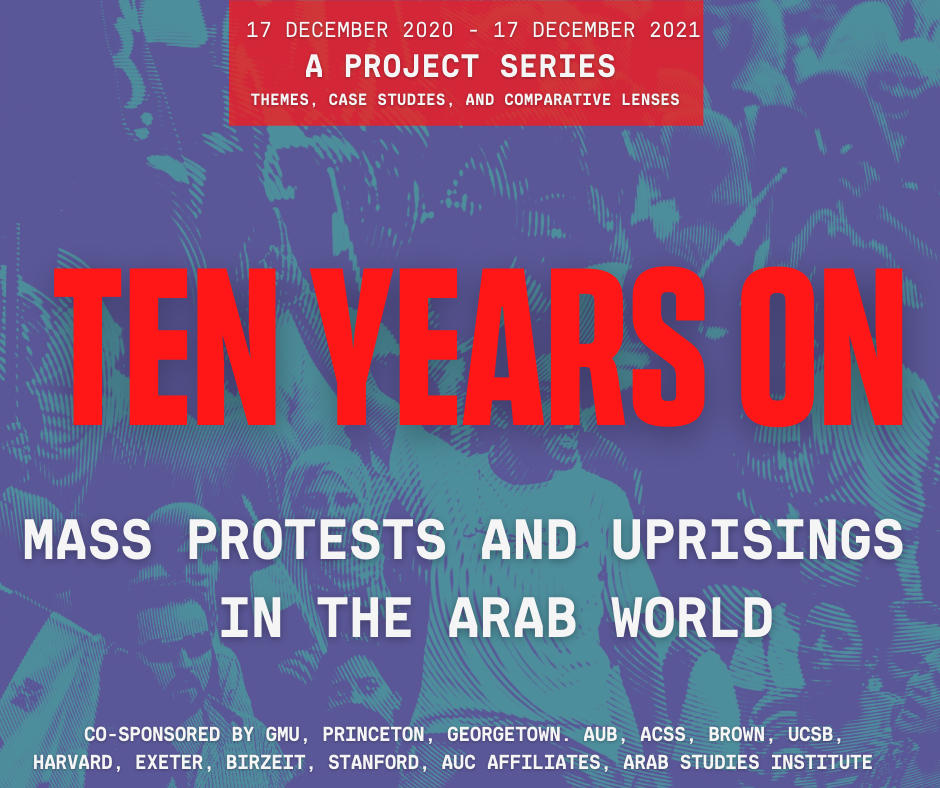 Reflections on Mass Protests & Uprisings in the Arab World

Join us at this two-part event by the collective project “Ten Years On: Mass Protests and Uprisings in the Arab World.” This is the first in a one-year series of events and knowledge production by the collective. Each of the panels will address reflections by the speakers on the politics and knowledge production related to the uprisings during the past ten years. This first event is intended to herald the yearlong conversation/activities.

TEN YEARS ON
Mass Protests and Uprisings in the Arab WorldDecember 17, 2020 marked the tenth anniversary of the start of the Arab uprisings in Tunisia. Beginning in 2011, mass uprisings swept North Africa and the Middle East, spreading from the shores of Tunisia to Egypt, Libya, Syria, Yemen, Bahrain, and the Eastern Province of the Arabian Peninsula. A “second wave” of mass protests and uprisings manifested during 2019 in Sudan, Algeria, Lebanon, and Iraq. The persistence of demands for popular sovereignty even in the face of re-entrenched authoritarianism, imperial intervention, and civil strife is a critical chapter in regional and global history.

In an effort to mark, interrogate, and reflect on the Arab uprisings, we launch a yearlong set of events, reflections, and conversations. We hope to produce resources for educators, researchers, students, and journalists to understand the last decade of political upheaval historically and in the lived present.

Over the past decade, a plethora of events, texts, and artistic and cultural productions have navigated the last decade’s spectrum of affective and material registers. We hope to contribute to these efforts through a historically grounded, theoretically rigorous approach that collaboratively interrogates the multiple questions the Arab uprisings continue to pose.