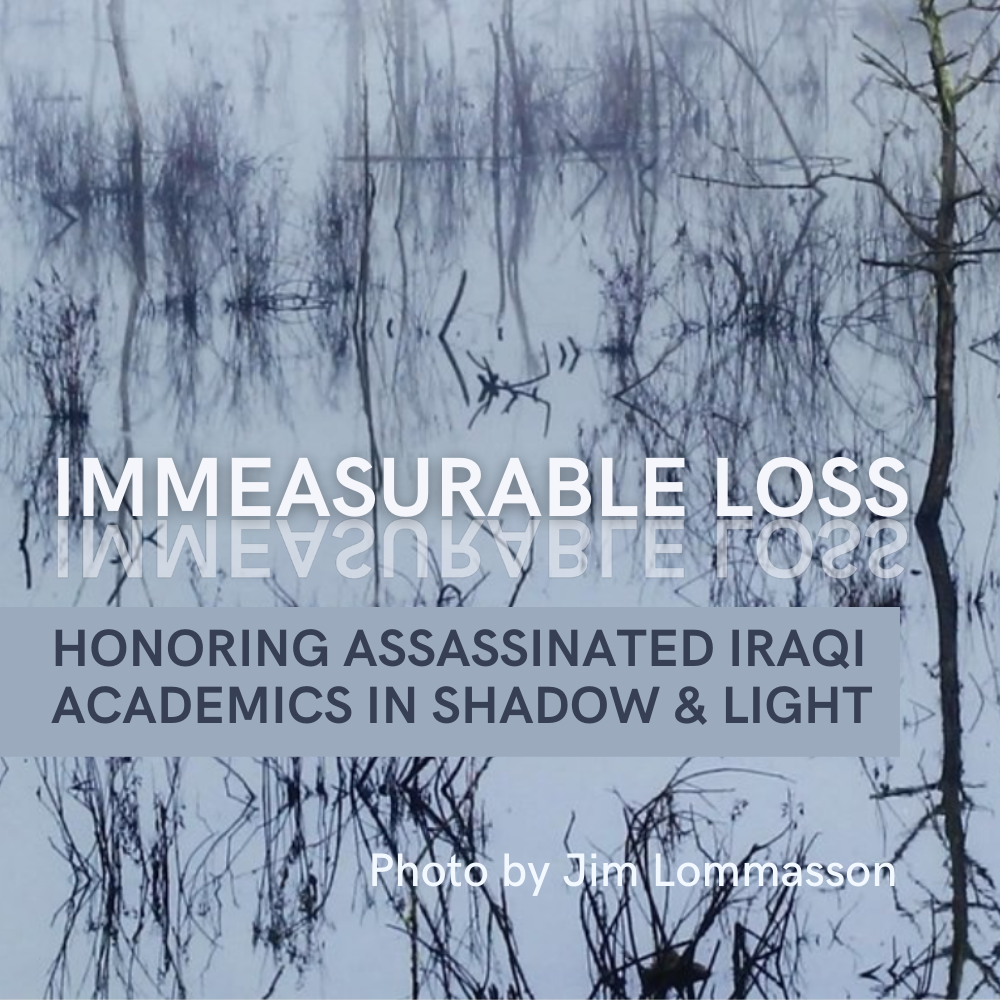 For the virtual exhibition of Shadow and Light at UC Santa Barbara, thirteen pieces were selected to illuminate the spectrum of educators, scholars and artists lost to the violence prompted by the U.S. led invasion, occupation and resulting sectarian violence in Iraq. During their lifetimes, the men and women memorialized in this exhibit enriched diverse fields of knowledge —from history to calligraphy to the study of bees. Each assassination represented an attack on the underlying principle of education—to share knowledge—and served as a threat to scholars throughout Iraq that they were at risk. Estimates of the total number of Iraqi academics slain runs over 700. Some of their names remain unknown.

In addition to bringing together a collection of art, this project also constitutes an archive, as both a testament to the lives of Iraqis and of international solidarity. Shadow and light inhabits these photographs, as well as stories and bits of information pieced together from news sources about each person’s life and death.

We invite you to view the exhibit currently featured by the UCSB Library, and join for a conversation on May 11 with Beau Beausoleil, the project director, in conversation with Mona Damluji and Heather Hughes, co-curators of the UCSB exhibit of Shadow and Light. The event will be moderated by Rachel Winter, doctoral student in Art History at UCSB.

SPEAKER: Beau Beausoleil is a poet and activist based in San Francisco, California. He is the founder (in 2007) of an international project that has used art and writing to address the implications of the car bombing of al-Mutanabbi Street (the street of the booksellers) in March of 2007 in Baghdad, Iraq. He is the author of 15 books of poetry including a volume entitled, Letters to Iraq (Intermittent Press -2020), written in response and solidarity with the October 2019 Revolution in Iraq.

SPEAKER: Mona Damluji is Assistant Professor of Film & Media Studies at the University of California, Santa Barbara and a Peabody and Emmy Award-nominated producer of the short documentary series The Secret Life of Muslims. Her teaching, research and creative work engages underrepresented media histories and cultural studies of oil, urban space and infrastructure with a focus on the Middle East and its diasporas. Mona is a co-curator of the traveling exhibition Arab Comics: 90 Years of Popular Visual Culture and Multitudes: An Art Exhibit after #muslimban. Her publications appear in Urban History, Comparative Studies of South Asia, Africa and the Middle East, International Journal of Islamic Architecture, Subterranean Estates: the Life Worlds of Oil and Gas, Ars Orientalis, MEI Insights and Jadaliyya. Mona is a co-convener of the IHC Research Focus Group on Re-centering Energy Justice 2019-2021.

Rachel Winter is a Ph.D. candidate researching contemporary art from the Middle East. Her dissertation, “A Spectacle of Inclusion: The Rise of Contemporary Art from the Arab World, Iran, and Turkey in the United States and England, 1970-2020” examines the little-known history of collecting contemporary art from West Asia and North Africa in the 1970s throughout the United States and England. This project articulates the way competing modes of knowledge production across festivals, galleries, and museums acted as interlocutors for the dissemination of contemporary Middle Eastern art in a tumultuous sociopolitical moment. She received her M.A. from the University of Iowa in Interdisciplinary Studies: Islamic & Middle Eastern Studies where she was named Outstanding Graduate Student in Islamic Studies, as well as her B.A. in art history with honors.