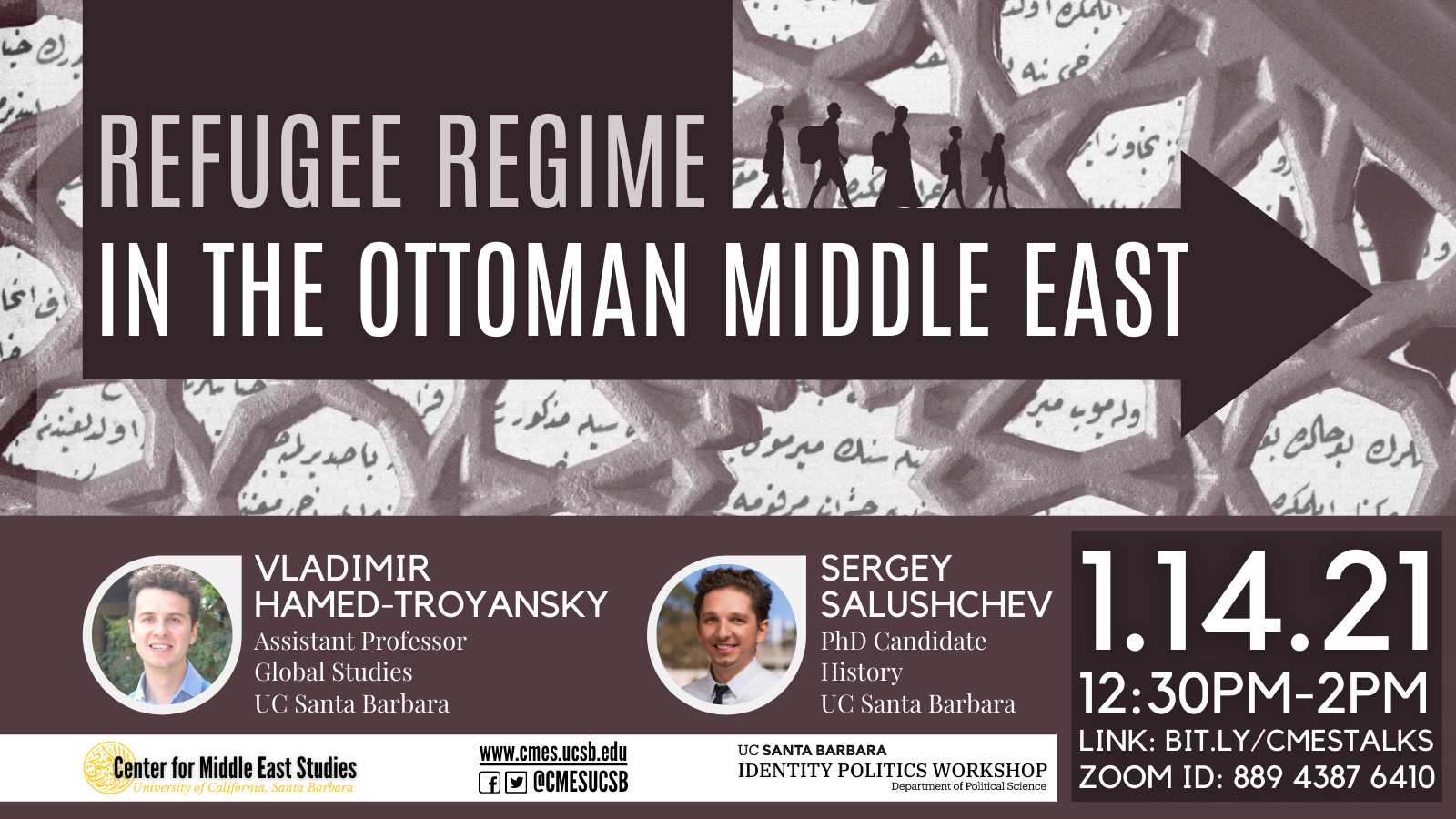 Join us to hear from Vladimir Hamed-Troyansky (Global Studies, UCSB) about refugee regime in the Ottoman Middle East!

In his talk, Dr. Vladimir Hamed-Troyansky will examine the making of the Ottoman refugee regime between the 1860s and World War I. Refugee regimes are typically seen as products of the contemporary nation-state order, going back to the 1951 United Nations Refugee Convention or, at the earliest, the interwar League of Nations. In contrast, Dr. Hamed-Troyansky argues that the Ottoman Empire constructed its own refugee regime, which functioned in many ways similar to the ones we have today.

In the second half of the nineteenth century, the Ottoman Empire lived through a prolonged refugee crisis, with successive arrivals of Muslims who had been displaced from Crimea, the Caucasus, and the Balkans. To accommodate these newcomers, the Ottoman government established the Refugee Commission in 1860. Over the next fifty years, the commission resettled several million Muslim refugees. Yet the commission also became a tool of the state in changing demographics and displacing Ottoman Christians. The talk will explore the tensions between immigration and refugee migration, and humanitarianism and ethnic cleansing.

SPEAKER: Dr. Vladimir Hamed-Troyansky is an Assistant Professor of Global Studies at the University of California, Santa Barbara. He specializes in global migration and forced displacement and the history of the Ottoman and Russian empires. He is currently preparing a book manuscript on the resettlement of North Caucasian refugees from Russia in the Ottoman Levant, Anatolia, and Balkans prior to World War I. His research appeared or is forthcoming in Past and Present, Comparative Studies in Society and History, and International Journal of Middle East Studies.

DISCUSSANT: Sergey Salushchev (PhD candidate, History, UC Santa Barbara) is a historian of the Caucasus region. His scholarship conceptualizes the Caucasus as a permanent borderland, a site of cultural exchanges, international commercial networks, contested memory, and imperial rivalries. Sergey’s dissertation investigates the history of slavery, the slave trade, and abolition in the nineteenth century Caucasus under the Russian imperial rule.